Everyone remembers exactly where they were and what they were doing when flight 93 crashed into the World Trade Center on September 11, 2001. I myself was sitting in my fourth grade math class, watching Mrs. Martin try to hold back tears as she told us we were going to be watching Bill Nye the Science Guy, rather than reviewing fractions as planned. Throughout the day, fellow students were being pulled out of school left and right; teachers and faculty cried quietly at their desks, and hugged each other in the hallways. At daycare, my father was waiting to pick us up early, a pained expression painted on his face. It was not until we reached our home, sitting in the living room, that he finally whispered, “Kids, today something happened that will change our lives.”

It wasn’t until I was much older that I began to realize the gravity of what occurred that fateful day. Not only were countless families irrevocably affected by the loss of loved ones, but the ways in which we conduct some of the simplest tasks were altered. The way we use the Internet is one of the main changes that occurred as a result of the terrorist attacks on 9/11. In honor of our fallen heroes and loved ones, lets take a look at how the internet responds to crises, then and now. 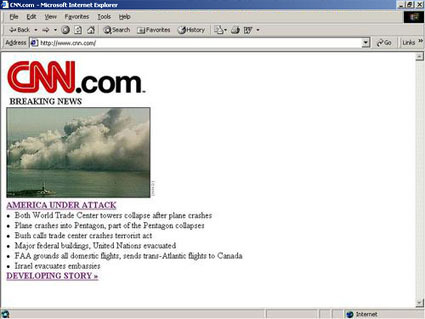 This was what the CNN.com homepage looked like on 9/11. The incredible influx of users to this and similar news websites forced site administrators to alter their websites to their most basic forms in an effort to reduce lag time, improve bandwidth, and maintain readability. Any headline or story unrelated to the terrorist attacks was removed to better provide breaking news to the reader.

The Manhattan area experienced a complete internet outage caused by trauma to the fiber optic network sustained in the wreckage. While the outage was largely localized to New York City and some surrounding areas, major commercial centers such as Washington D.C., San Francisco, Chicago, and Dallas also experienced connectivity delays as a result of the damage.

Meanwhile, social media was virtually non-existent at that time. Apart from chat rooms, instant messaging, email, and novice blogging sites like Xanga, there were few ways one could share media, ideas and emotions in the ways that we are familiar with today. There was no Facebook, no Twitter, no Reddit, no YouTube, not even Myspace; heck, Mark Zuckerberg was still in high school.

Catastrophic events such as those that occurred on September 11th, 2011 have spurred a lot of change in the way that internet and it’s administrators do things. At the time, Google News did not exist. Users were unable to find any updates about the terrorist attacks through search. In order to prevent future lags in information flow, Google News was created to crawl news sites quickly and display snippets of the latest stories to its users.

Now there are thousands upon thousands of videos available on YouTube depicting every angle, every medium, and every emotion that was present that day; which is pretty impressive since none of that stuff was available until YouTube was founded in 2003. Now, you can watch real-time footage of congressional proceedings, and immediately upload videos from your phone, tablet or computer (mind you the first iPhone wasn’t even available until 2007).

Now we are able to share our fears, beliefs, feelings, whereabouts, and opinions across multiple social networks at the click of a button; and even if you are unable to get Ethernet connectivity, the invention of wireless communication networks allows you to post from even the most remote locations. Imagine if those who were trapped inside the towers had that chance: would they have been able to say goodbye, or tell their families how much they love them?

The point is, the difference between then and now is that the Internet allows for a light to be shined upon catastrophe, to demystify the unknown to an extent, and to create a worldwide dialogue to better educate and encourage one another. The losses that occurred that day can still be felt, but one thing is abundantly clear: The Internet has created a global community to better help us understand the world around us.